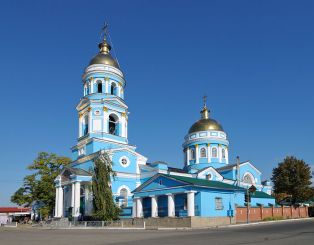 Holy Ascension Cathedral - one of the most famous temples of the city and the entire Raisin Kharkiv region. Church was erected in 1826. The decision to build was made to replace the church, which was located on the bank of the Seversky Donets River, and under the influence of the water began to collapse. Therefore chose a new location for the church.

Property of the church is the icon of the Mother of God Peschanskaya - one of the most unique and revered shrines of Ukraine. The history of its occurrence in the temple is quite interesting. In 1754 St Joasaphus going on a trip to Belgorod Diocese. In just a few days before the trip, he had a dream that he had examined the church and in one of them, among the piles of garbage, saw the icon of the Virgin and Child. When the bishop arrived in the city Raisins and visited the Church of the Ascension, he found that same icon, which appeared to him in a dream. Icon serves as a partition for which to pour the coal. Joasaphus ordered to put an icon in the proper place. Bishop spent the next few days in prayer before the icon, and 3 days later he was overtaken by death.

For more than 250 years to the icon of the Mother of God with their troubles, tears, despair and disease, people come from all over the country. Anyone who believes she is sure to help.

Venerate the miraculous icon at any time, the Holy Ascension Cathedral is open daily. The church opened a hotel for pilgrims.

Near the temple is located is one more famous landmark edge - Kirichenkova Krynica . By the holy source of the healing water come pilgrims and tourists from different parts of the country.

What is the best accessible to the Ascension Cathedral in Izium from: