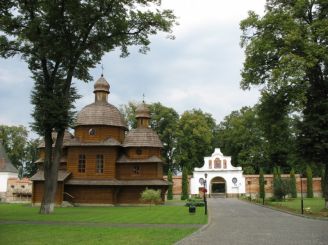 Krehivskyy Monastery of St.. Nicholas - one of themselves visited places in the vicinity of Lvov , Greek Catholic church. It is also called Basilian monastery - the title of the Order of St. Basil the Great, one of the main monastic orders of the Ukrainian Greek-Catholics.

Having been here, you are immersed in an atmosphere of silence, peace and tranquility created by centuries of prayer and labor of the monks of one of the oldest monasteries. It was founded in the early 17th century by the monks of Joel and Sylvester in the caves of the mountains Poboynoy. Later, from the hetman Zolkiewski founder Zhovkva was obtained planning permission.
The very first structure was a wooden church of St. Peter and Paul. In the Middle Ages, monasteries were not only spiritual needs, but also helped to defend themselves against the enemy. Krehivskyy Defensive walls of the monastery were useful for protection against the Turks and Tatars. As evidenced by the record, the monastery visited Grand Hetman Bohdan Khmelnytsky and the Russian Tsar Peter I.
Knew monastery and hard times: it robbed several times, and during the Soviet era was closed and placed in its territory boarding school for children with disabilities. Revival began in 1990. The building was renovated, reconstructed wooden church bell tower.
Believers are particularly honored two miraculous icons - St. Nicholas, the name given to the monastery and the Mother of God - there is a legend that she helped a blind girl to see the light. Especially a lot of pilgrims in the monastery 20, May 21 and 22 - year-old on Nicholas. In the forest, not far from the monastery, there is a healing power and Krehivskyy preserved cave church.

What is the best accessible to the Krehivskyy Monastery from: