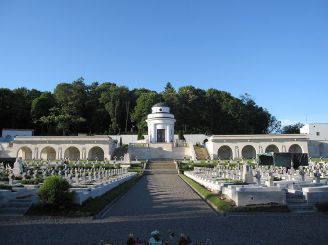 The place where the memorial Lwów Eaglets, was the last refuge for young Polish children who died during a fight between Ukrainians and Poles. The war that was fought in the early twentieth century, took many lives on both sides. Ashes of very young defenders of Lviv was buried here, in the memorial complex that Lychakivsky cemetery .

Age of children, volunteered for the war, is striking. The youngest defender was only 14 years old - his name took its place on the pages of Polish history.

The authorities of Poland , who previously owned the land, erected a memorial eaglets in the 20-ies of the last century. Rest on military burials, except young Polish guys found allies: American volunteer pilots and the French military.

The project has developed a former memorial complex "Eaglet", which, after the tragic events followed the paths of architecture.

In Soviet times, Memorial eaglets, of course, was razed to the ground. Survived only central tombstone - it managed to take to Poland. However, after the collapse of the USSR Polish investor undertook the restoration of the complex. This initiative provoked resistance from Lviv authorities who considered inappropriate inscription "Polish liberators." Around the restoration of the memorial complex scandal. To resolve the conflict was possible only after the intervention in the process of then President of Ukraine - Viktor Yushchenko.

Grand opening of the Memorial eaglets held in 2005. Participated in it the presidents of both states - Poland and Ukraine. At the same time opened and a memorial dedicated to the soldiers ZUNR who also fell in the war.

What is the best accessible to the Memorial Lwów Eaglets from: