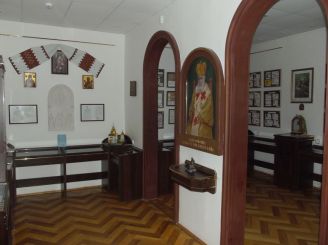 The idea of creating a diocesan museum dates back to 1991 when Lord Julian Voronovskii visited Rome in one exhibition on spiritual themes. There he met with the author and the exposure Roman Smyk. Waging a friendly conversation, Bishop shared his idea, and Dr. Smyk, in turn, admitted that he is the owner of the assembly materials about Joseph the Blind, which became the basis for the creation of the museum.

Opening of the Diocesan Museum held October 11, 1998. On that day in Truskavec gathered plenty of theologians, clergy and scholars. This museum was supposed to play the role of a kind of spiritual enlightenment of the temple and perform religious and educational, cultural and artistic mission.

The basis of the concept of the Diocesan Museum has taken the idea of ​​recreating the atmosphere of the monastery. Thus, there is the possibility of visitors not only to plunge into history Sambir-Drohobych Diocese, learn about the life of the Church`s greatest thinkers acquainted with the objects of religious art, but also to turn in prayer to God.

What is the best accessible to the Diocesan Museum from: