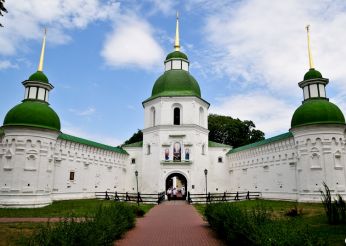 Savior Transfiguration Monastery - this is one of the oldest in Ukraine and one of the first monasteries in Kievan Rus. It stands on a steep bank of the Desna. This center of culture and enlightenment of the people, the abode of Orthodox Christianity. The monastery experienced many heroic and tragic events, destruction and restoration. Today, his main cathedral and other buildings attracted by its unique beauty, take guests and hold services.

Time base is unknown, but it is assumed that it was founded by Prince Mstislav in 1033. In the 12th century on the territory of buildings, surrounded by a fortified wall with towers, was built of stone Cathedral of the Savior. In 1239 the monastery suffered from the invasion of the Mongol Tatars, then destroyed almost all the temples, but was revived in the 16th century stone building. It was erected ward housing bell tower, which burned the Poles in 1604, and the abbot`s chambers. After 1657 the monastery served as a princely residence for Archbishop Lazarus Baranovichi.

The revival of the Holy Transfiguration Monastery

In the middle of the 17th century opened Collegium, which was the beginning of spiritual and cultural renaissance. Since that time, a widespread construction of the monastery. In 1791 it began the construction of a massive five-domed Cathedral of the Transfiguration, dominating the territory. Ward case with St. Peter and Paul church, abbot`s chambers with Elias Church dated 16-18 centuries. In the 17th century baroque built cells and the walls and towers rebuilt after much destruction. Also, it wraps bell tower in the 19th century.

The architecture of the building Transfiguration Monastery

Surprisingly original combination of styles in the buildings. Cathedral in the style of mature classicism boldly echoes the techniques of Ukrainian Baroque monastery buildings in Moscow and Uzoroche. Some buildings are recreated almost from the ruins, but retained the old spirit of the time of creation of the monastery.

From the outside the church building erected monuments to the victims of the concentration camps. Southwest face of the fortress in the center of the cavity forms a trapezoid. From the end stands an octagonal bell tower. The entire territory of the monastery on planning is very similar to a square that is outlined by a fortified wall with towers.

When to visit the monastery in Novgorod-Seversky

Best time to visit the city and the Holy Transfiguration Monastery - this is the end of April and beginning of May. At this time there is a spill Desna. With the towers of the monastery offers stunning views of the surrounding land. You will have literally boundless sea, which will see the tops of the trees and the blue expanse. This happens only once a year.

Where is the monastery

The city of Novgorod-Seversky can find unique architectural construction on the high bank of the Desna River on Pushkin Street 1. Visit can not only churches, but also towers, galleries, underground. Open monastery from 9:00 to 19:45, except on Fridays. Friday - 19:00.

Transfiguration Monastery in Novgorod-Seversky is one of the best places where you can spend holidays in May .

What is the best accessible to the Transfiguration Cathedral from: