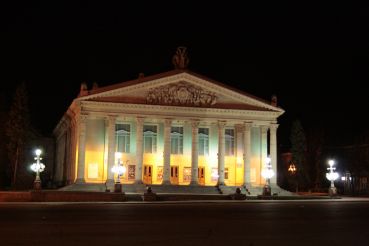 Ternopil regional theater Taras Shevchenko joined in the walls of the troupe of the Ternopil and   Chortkiv .

The building itself was built in 1957   in the popular while the Empire style. The building has a height of 2 floors are wide steps, roof supports majestic colonnade, and is crowned by the construction of the sculpture. On the facade of the building is set bas-centered portrait of Taras Shevchenko. In the early 90s of the 20th century on the side of the building there were busts H.Skovoroda, Franko and L. Ukrainka. In 2000, the theater was given the rank of academic.

Number of employees 140 people theater dostegaet.   The theater has two stages and can hold up to 600 visitors in a large and 80 in small rooms. Also within the walls of the theater on the premises for rehearsals, designed for groups up to 60 people. In this room are placed chamber performances, when there are not rehearsing orchestras or ballet.

What is the best accessible to the Ternopil Drama Theatre. Taras Shevchenko from: