Temple of the White Lotus 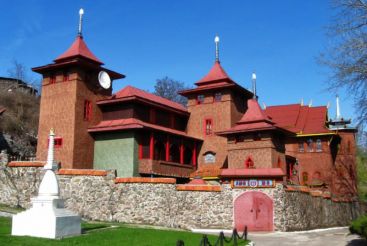 Followers of the church belong to a kung fu school "Sha-Fut-Fan." The founders tell the legend that when creating the foundation of the temple was found a stone that had the image of Buddha with a mask of a warrior. Also, many believe that the founder of Buddhism has European roots, but its likely place of origin is the territory in which is now modern Ukraine. The assumption based on the fact that the name of the founder of Buddhism Shakya Muni translated as Scythian sage.

Temple takes visitors and guests. On its territory you can see the tea ceremony, as well as see how the followers learn kung fu, self-defense and Thai boxing.

This temple is indeed very unique place for tourists who visited the East and read his tradition. Be sure to take a look at this place if you want to feel the spirit and power of the East.

What is the best accessible to the Temple of the White Lotus from: