Nativity of the Virgin, Henichesk 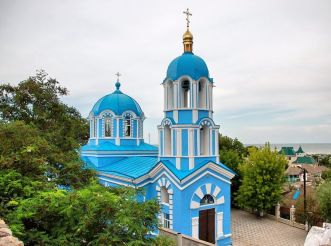 Nativity of the Virgin in Genichesk situated on the only elevation in the endless steppes of Tavria. The shrine was built in 1907 in the spirit of Byzantine architecture.

The temple has a characteristic cross shape of Christian buildings. Above the sloping roof stands a semicircular dome. Feigned part of the bell tower is crowned with a golden bunk tent. The walls of the church of the Nativity of the Mother of God shine blue and white colors that complement the amazing blue of the Sea of ​​Azov.

The history of the Church of Our Lady

The history of the church is closely connected with the name of the elder Sozont Ivanovic, a former merchant, an officer who participated in the Crimean War, and then take the elders and who had the gift of providence. The city was still to be built on city dumps have accumulated mountains of debris. And once Sozont came to a meeting of city council deputies to zemstvo, asked for an abandoned plot of land for the monastery grounds.

First Elder idea was met with disbelief, but the land allocated to the elder. He dug his cell, began to live as a hermit and collect funds for the construction of the temple. Soon, he was supported by the Orthodox inhabitants of the city, and on the day of the Nativity of the Virgin September 21, 1904 was laid the foundation stone of the future church.

Construction was completed in 1907, and a year later Sozont Ivanovich died and was buried in the crypt of the temple. Genichesk famous for its craftsmen bells chime, which Orthodox holidays climbed the bell tower, and the city poured magical chime, Reflects on the sea.

The construction of the monastery attended by almost all the inhabitants of Genichesk and near lying villages, making donations and dumped the flour, vegetables and grains. In dry steppe town, which was built only, Nativity of the Virgin was a true oasis. At the bottom of the hill has a swimming pool, flower beds, gardens, stables, at the top - a temple and an annex for meals. From the church was an alley, on both sides of which the fragrance of rose, and in the courtyard of a family strolling peacocks with chicks. In a small chapel near the entrance, decorated with icons and burning lamp, and the duty monk read Psalms. On the other hand, from the entrance directly into the ground were dug cells.

During the Revolution and the persecution of the priests, the monks took refugees and settled in its territory. Then, during the Soviet era the Monastery premises served as a warehouse for grain and Sozont grave was ruined. In 1941, the service in the church have been restored, the service kept father Constantine. He once told townspeople about the crime and communists Vinnytsia tragedy, which was witnessed: he saw the excavation of mass graves of people, some buried alive. When in 1944 the Soviet troops liberated the Genichesk, Constantine denounced his father was arrested and died in prison, and later rehabilitated posthumously. Soon after the arrest of Constantine the church was closed again. During the Soviet era the church premises were used as a warehouse, then a sports hall for police employees has been arranged there.

Only in 1989 the Virgin Christmas temple was returned to believers. Through their donations, restoration work began. A year later, it was recreated in its original form the dome of the temple. Today it is visited not only by tourists, resting on the azure shores of the Sea of ​​Azov, but Orthodox pilgrims from all over Ukraine.

Before Genichesk most convenient to reach by train or train to Novoalekseevka station, where a lot of taxis and buses goes on Genichesk. Nativity of the Virgin Mary located on the street Monastery, a short walk from the beach.

What is the best accessible to the Nativity of the Virgin from: