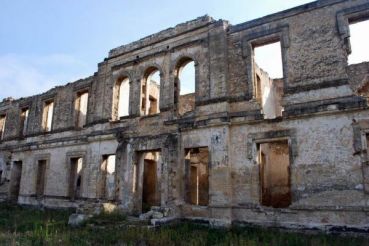 Prince Trubetskoy Manor Cossack village is one of the largest architectural ensembles of the Kherson region. It includes numerous buildings in the territory of the village, including the palace and park ensemble.

Palace at the present time, in need of renovation and consists of a wonderful landscape design of the complex. Retaining walls and towers, gates, bridges, flying buttresses that support the wall of the cliff, is a continuation of the coastal topography and create an impression of the overall harmonious ensemble. Today difficult to separate the creation of man and nature`s hands. In the former magnificent park on the banks of the river Kozak there is not arched viaduct, or other park facilities. Only running on coastal rocks springs could tell of a bygone grandeur estate Trubetskoy and Cossack village.

Trubetskoy palace was built in the French Renaissance style with gothic elements, the entire complex was like a unique fairy-tale castle. He owned a large main building: palace, a number of outbuildings, stables; of land rose massive walls with exterior stone poluarkami. All crowned corner castle tower coming out to the Dnieper. The palace complex was surrounded by a large garden. To date, most of the buildings are in ruins, preserved only the frame of the main building.

Currently, the palace is owned by JSC "Prince Trubetskoy", it planned its restoration. Since the revival of the former glory of noble wines Cossack, the new owners promise to restore and estate. The castle itself is closed, but a walk in the surrounding area, especially on the part of the Dnieper, is a great pleasure. Near the castle is the famous Nightingale Grove, where you can hear discordant warbling nightingale and a drink from the springs of the purest water.

Ever since the estate and its owners are linked unusual legends and stories, sometimes quite strange. For example, during the period of Soviet power in the Cossack told that the vineyards Trubetskoys workers made bandages to close their mouths, that they should not eat grapes during its collection.

How to get to the farm

Trubetskoy estate is situated in the village Cossack Bereslavsky district, Kherson region, near the Kakhovka HPP . From New Kakhovka to Cossack 5.7 km. You can get a taxi or take a bus station Nova Kakhovka by bus (every hour) or by shuttle bus.

What is the best accessible to the Manor Trubeckogo from: