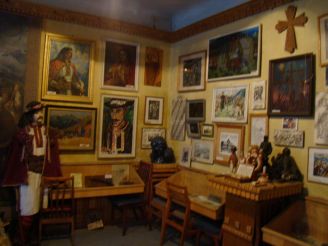 The village Pechenizhyn in 1700 was born a hero, people`s avenger, the most prominent leader of the liberation movement in the Carpathians opryshky 18-19 vtrjd. Few people know that Oleksa Dovbush born into a poor peasant family Hutsul. From birth was dumb, it cured a local molfar Joseph explicit.

At an early age he joined the formation opryshky leading the national liberation struggle and involved redistribution of property of the rich to the poor peasants. At the end of the 30s and the first half of the 40s of the 18th century led the popular movement. In 1745 Stepan was killed Dzvinchukom traitor who collaborated with the Polish gentry. All this and much else says Oleksa Dovbush Museum. The institution began its work in 1971. However, in 1980, the room was unusable. Since 2004, the museum housed in four rooms of the former House of everyday life near St. Michael`s Church .

The exposition of the museum tells the history of the village from ancient times to the present. Collected household items, clothing, tools, and so on. D. Expose copies of paintings, sculptures, benches, artifacts. The largest room is devoted to the movement opryshkov.

What is the best accessible to the Museum Oleksy Dovbusha Pechenizhyn from: