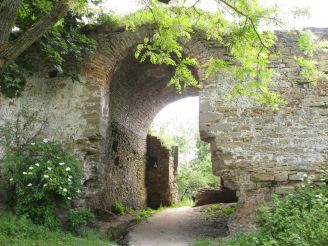 Zaslavsky Gate, also called Iziaslav gate   is the only surviving member of stone fortifications defending Mezhirich in the Middle Ages from the attacks of enemies. Next to Brahma is preserved to our days   Holy Trinity Monastery , also serves as a defense of the village. In the 16-17th centuries the monastery was the main point Mezhirichskoy protective fortress.

In those turbulent times around the village were built high earthen ramparts, which was built in the corners hexagonal bastions. Get into Mezhirich could only through two slotted in the shaft and fortified gate travel - Dubenskaya Brahma, located near the center of the modern village, and Zaslavsky gate facing in the direction of Izjaslava (Zaslav).

Unfortunately, for a long time Zaslavsky Gate is in a dilapidated condition. Informal renovation of this historic building was started in 2012 by a local philanthropist. But then, these semi-underground work has not been completed because their further implementation was banned by the authorities. So what can now be seen - it is only the lower tier defensive rectangular structures built of sandstone.

What is the best accessible to the Zaslavskaya gate Mezhyrich from: