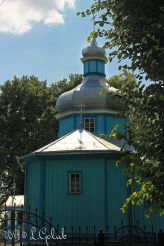 Having visited the Rivne region, you can visit the many unique architectural monuments, as well as the castle buildings, which have been preserved since the days of Kievan Rus. One of these monuments is the St. Nicholas Church in the village Peresopnitsa.

History of the temple

It is a wooden church, which is located in the western part of the settlement. It was erected in the 18th century on the site of an ancient temple, which existed at a time when it was created Peresopnytsia Gospel, about the 16th century.

Nicholas Church - a very beautiful building, which is a three-part single-storey building. A little later, an additional entry was made in it, and on the other - the porch. Next to the church is a wooden two-tiered bell tower. This temple is different harmonious proportions and belongs to the most beautiful spiritual structures of the region. Also near the church is reconstructed fragment Peresopnytsia settlement of 12-13 centuries - wooden wall with three fortified towers.

Having been in this place, you will feel like in the air the spirit of antiquity, feel the peace, comfort, ease, and just relax from the bustling metropolis. Go with family, friends, or yourself, and you will not regret the time spent in this ancient settlement.

Nicholas Church in the village of Peresopnitsa, 25 kilometers from the city of Rivne . To get to it, you can by car or by bus stations.

What is the best accessible to the Nicholas Church from: