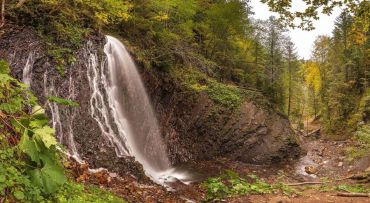 Zhenetsky waterfall - the highest waterfall of the Carpathians. Despite the youth of this waterfall, it has already become popular among tourists.

Waterfall Beach originates in the river Zhenets. I formed it in the middle of the 20th century. As a result of the flood collapsed soil. Now the water falls down from a height of 15 meters. The cold water of a mountain river with the noise break off a cliff. There really see the whole strength of water. Quiet and smooth it can crush mountains. From such a spectacle is breathtaking. To experience the feeling that nature itself is committed to you their innermost secrets.

Also, the waterfall known as the "Zhenetsky Guk." So he called the local people because of the noise emitted by the water flow. The word "gook" is translated as noise or loud sound. Each time of the year does the waterfall special. In winter, it turns into a powerful pillars of ice, inside which is still heard the noise. In spring and autumn waterfall gaining its strength waters of the Carpathians. Summer Zhenetsky Hook is surrounded by abundant vegetation.

To get to the waterfall can be on the road Rachel - Ivano-Frankivsk . Not far from the village Mykulychyn have asphalt road leading to the reserve. At the entrance to the protected zone established barrier. All the way to the waterfall takes about 2 hours.

What is the best accessible to the Waterfall Zhenetskyy Hook from: