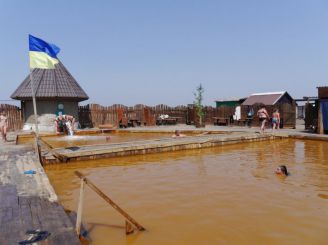 In a 40-minute drive from the Iron Port and very close to the village fin is healing geyser "Hot key". He appeared by chance, as a result of drilling wells to detect gas field. It turned out that the gas at this point is not, and well preserved. Somewhat later, appeared on the surface of the source of hot water.

Initially, there were bathing locals, but luxuriated in the warm water some tourists. Later, a source of interest to specialists and conducted a review of the water. It turned out that it is very rich in bromine, which is perfectly cures many diseases. In 2005, the source was surrounded by a fence, inside arranged cabanas, invited masseurs and organized medical center.

Geyser is and three baths, one has spring with water temperature to 80 degrees, the second water flows cooled down a bit, and the third is a therapeutic mud.

Source works all year round.

What is the best accessible to the Healing geyser hot key fin from: