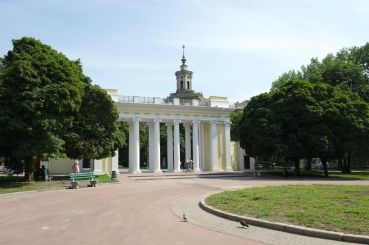 Central Park of Culture and Rest. Maxim Gorky - is the main park and the heritage of the city of Kharkiv . It occupies an area of ​​130 hectares. Locals call it rustic yet Nikolaev park. Solemnly, he was discovered in 1907, when a little sprouted trees, soot students. It was built by the forces and financial impact residents.

Mostly park was designed for horse riding, as the selected area is far away from the city. Eventually it was decided to split it on the model of the Bois de Boulogne in France with avenues for riding in carriages and horse riding.

Having collected a lot of amazing events of the city, the park was reconstructed several times. During one of these rearrangements were installed new attractions are made ​​in Germany, Italy, Canada, France and the UK. All the attractions of 2011-2012 production. Among them - the best in Ukraine, an entertainment center, a roller coaster, carousel French, the largest Ferris wheel in Ukraine (height - 55 m), the house of horrors. There are also attractions for small children, a complex for lovers of extreme sports, roller skating, playgrounds, race track and much more.

Central Park of Culture and Leisure - a place that is required to see every. You can not only relax, but also quite fun.

What else can you visit in Kharkov

Kharkiv - a city in which there is a wide variety of museums and monuments . Here you can see beautiful temples , for which tourists come not only from Ukraine but also from around the world.

What is the best accessible to the Central Park of Culture tai rest. Maxim Gorky from: