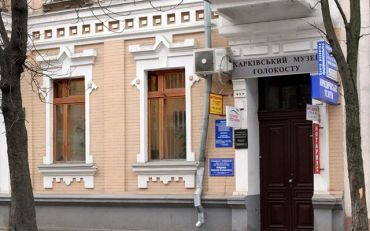 Kharkiv Holocaust Museum was the first museum in Ukraine on this topic. Discovery   took place in 1996. The basis for the creation of a museum became documents and materials collected by the Kharkiv Regional Committee "Drobytsky Yar", as well as the founder of the family archive of the museum Larisa Volovik. The first tour took place in December of the same year, since the museum began performing as a spiritual center of the Jewish people of the city.

The exposition is divided into several rooms, each of which has a specific theme. The first room - it   Hall of Remembrance, photographs and personal belongings of the Kharkiv citizens who were victims of one of the major tragedies of the 20th century. Second - Hall of the people who survived those dark chapters in modern history. Special attention should be the third hall of the museum, as they have collected   things that survived their owners. Pre-war life of people represented by objects and images, each of which has its tragic, and even a couple of terrible story. A separate place is occupied by papers on the first in the history of   The trial of war criminals held in Kharkov in 1943. Also act exposure "Place of the Jews of Kharkov in the fight against fascism" and individual exhibitions of prominent people of the city.

Public organization «Kharkiv Holocaust Museum" includes the museum, scientific and educational center, gallery "Ami" and the newspaper "Digest E". The museum is very popular with visitors who are not only representatives of different nations, but also of different age, religion. Every tourist in the museum can gain for themselves something new, previously unknown.

What is the best accessible to the Holocaust Museum in Odessa from: