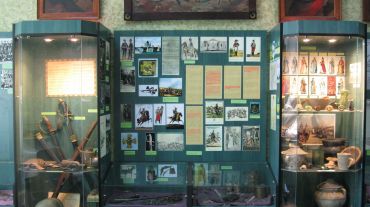 There are non-governmental organizations in Ukraine are ready to take up the creation of the museum. One of these - "Sumy regiment suburban Cossack named Gerasim Kondratyev." The organization has done its best to in 2003   Sumac   opened a museum of the history of the Sumy regiment.

Find a museum is not easy, he   It located on the street Resurrection   in the corner building and occupies only one room. The exposition tells the story of three centuries of the city. Exhibits are: equipment Hussars, fragments and lattices monastery gates, and another portrait of G. Kondratyev, the founder of Sumy.

One of the exhibits was the site of a wooden palisade, which was at the fortress. It dates back to the 17th century, at this time began to settle in the territory of the future city. The fragment was found during the renovation of one of the streets of the city.

Another museum can tell about the everyday life of the Cossacks and hussars legendary, the first settlers and the war with Napoleon, the beginning of his military career Zhukova and combat weapons of various ages. A museum by appointment.

What is the best accessible to the Museum of Sumy regiment from: