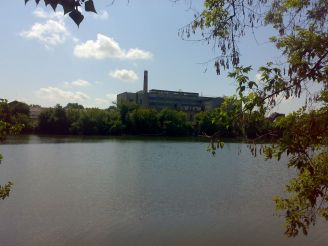 Sugar factory in Aleksandrovka is also called Kongressovskim because after the revolution, the village for a while renamed Kongressovku. Enterprise more than a hundred years. It was built in 1905 by Count Nikolai Kleinmichel.

Relatively recently, was destroyed part-preserved interior of the house, in particular, cast iron curled staircase that led from the first floor to the second, where the manager`s office. But the room remained intact dorms and libraries.

There, on the opposite shore of the pond of sugar, there is a house manager and a water tower at the time. Still preserved and pre-revolutionary park and a school after him. This area in the early 20th century during the construction of a sugar factory was surrounded by a fence. The wall still towers over Sugar pond, but partially preserved.

What is the best accessible to the Sugar Factory from: