Church of the Assumption, Malyzhyne 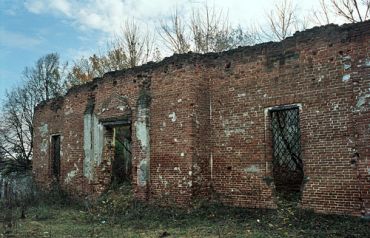 The first church in the village Malyzhino was built by Colonel FI Osipov. Stone Temple appeared in its place under the leadership of the landowner Karp Pavlov in the early 18th century. After a while it was attached to a stone bell tower.

Church of the Assumption of the Blessed Virgin had several ancient books, among which the 1694 edition of the Gospel, and the miraculous icon.   Icon of the Mother of God "Perishing" turned into a stone church from the old church. Tradition says that the icon of the Mother of God appeared in the field in 1770, and 10 years later when the rich landowner Lesnitskaya recovered from a terrible disease with the help of the icon, the woman gave her a silver robe. In these parts three cholera was raging, and three parishioners asked the intercession of the icons and the attack passed. And today, go to the icon with requests for healing.

The temple is now in a derelict state, and is not reconstructed.

What is the best accessible to the Church of the Assumption from: