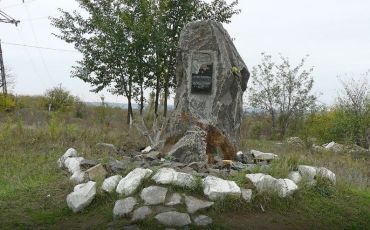 Odessa is still noisy stories about Mishka Yaponchik. Perhaps not only the city heard about the "King drayman." The legendary Odessa Raider was filmed more than once and for all entered local folklore.

This is probably one of the most famous bandits in Ukraine. In Voznesensk set even monument Mishka Jap. According to one legend, he and his band were in the Red Army during the Civil War, but a stray character Bears are not accustomed to obey others. Mutinied, Mishka Jap wanted to run to Odessa, but security officers caught up with the bandit. During the arrest Bear Jap was shot in 1919.

Now the place is worth a granite monument. It is set near the entrance to the park "Marina Grove". On the monument a memorial tablet on which is written the name of the currently Bears Jap.

In addition to this monument to the Ascension, there are several interesting places. For example, the Art Museum named Kibrik .

What is the best accessible to the Monument Mishka Jap (Vinnytsia) from: