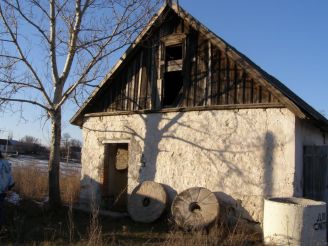 Family Tropin - is merchants and farmers who lived in Kherson in the early 19th century and have done a lot for the city and for the region. They built a hospital, a church, maintained schools. On the left bank of the river Ingul has settled their family estate. Construction of the house dates back to 1912. It is an old mansion, the composition of which includes the cellar and utility rooms.

In Soviet times, in one wing of the mansion functioned office of the collective farm, and then later opened a branch of the farm. Part of the house is lined with Italian tiles from the early 20th century. To this day the house remained bad, suffered greatly from the effects of time and the fans of easy money. Windows and doors are removed and laid bricks and cement. Since 1992, the building is exposed to an active robbery. Since the 2000s, at the expense of the regional landscape park "Priingulsky" is an active restoration work. Tropin Manor - a unique attraction. Around the house is planted with a lush garden, which is very popular with travelers

What is the best accessible to the Manor TROPININ from: