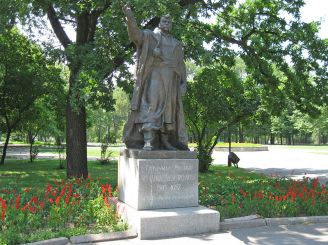 It was not in the history of Ukraine`s more controversial figure than Bohdan Khmelnytsky. He was loved and feared, admired and hated. Perhaps it is the most famous of Ukrainian Hetman. It is not surprising that in Ukraine established so many monuments to this man. One of the most popular set to Kiev. But equally striking monument to Bogdan Khmelnitsky is located in Zaporozhye.

The history of the monument to Bogdan Khmelnitsky

Monument to Bogdan Khmelnitsky set back in 1965. We worked on the monument to Mikhail talented sculptors Fedor Zaitsev and Hudas. Authors sculpture thought through every detail. The monument has turned out excellent. The mighty figure of the hetman stood on the podium. Like many monuments of that time, Bohdan Khmelnytsky is depicted with a raised right hand. Many people make up stories where it indicates a menacing finger disgraced hetman.

For many years, the monument was abandoned on the territory of recreation. But the 400th anniversary of Bogdan Khmelnitsky monument was restored and transferred to the Park of Metallurgists.

So nice to walk in the shade of spreading trees of the park. Metallurgists Park - a great place for a leisurely summer walks. Lights, benches and well-groomed alleys in the park create a romantic atmosphere.

How to get to the monument to Bogdan Khmelnitsky in Zaporozhye

You can use the services of public transport. You come shuttle bus number 79 and number 89.

What is the best accessible to the Monument to Bogdan Khmelnitsky from: