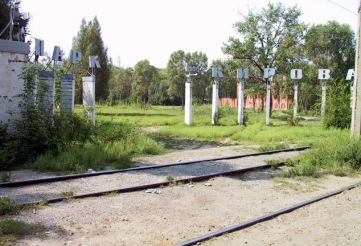 Kirov Park is located on the left bank of the city of Dnepropetrovsk . Beautiful landmark famous for its interesting green structure and an artificial lake, which is located in the central part of the park. Who is it like to fish the locals.

Kirov Square was founded during the Soviet era. Area wildlife was named after the state party leader Sergei Kirov. In Dnepropetrovsk, there are several dozens of such places of cultural and developmental assignment, opened in the mid-20th century and named after the prominent revolutionaries.

The park Kirov operated its own infrastructure: a summer dance floor, held the annual flower festivals, cinema, outdoor café, as well as fountains and a tank-monument. Last disappeared in an unknown direction, before he was deprived of the barrel of the Vandals, it happened at the end of the 1990s. But the main attraction of the park has always been a lake. Artificial pond decorated green park and gathered around him children and adults who were fed water birds and fish brought bread. Despite the fact that the state of the pond started strongly, many animals continue to live in it.

In recent years, you can often hear about the plans for the reconstruction of the park. There is the idea of ​​creating within it a zoo or children`s recreation areas. There is even a cleared area for future construction, but it is only in the plans. The rest of the beautiful state park needs urgent repair and rehabilitation works, which are not held for more than 20 years.

How to find the park

The park is easy to find, moving from street Karuna Bazhov, Lugovskoy or on the way of Amur bridge (from the right bank). Also, go to the bus station square Ostrovsky, or from the center.

Dnepropetrovsk - a very colorful city, which is just saturated with various interesting sights .

What is the best accessible to the Kirov Park from: