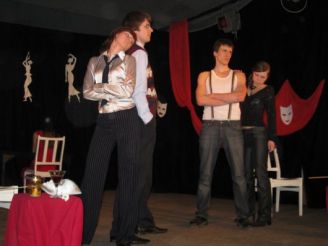 Chernihiv Regional Youth Theatre - one of the options, where you can spend the evening interesting. It is located in the cultural heart of the city. Nearby there are many other attractions of Chernigov.

The theater was founded on the basis of the puppet theater . Opening the Youth Theatre held May 1, 1985. It is not marked by the presented. On the stage he was shown the staging of Boris Vasilyev, which displays the events of the Great Patriotic War.

Audience hall has 96 seats. Such seats can not accommodate everyone. Theatre directs a talented manager GS Kasyanov. For his work and contribution to the cultural development of the theater received numerous awards and prizes.

At the Youth Theatre has grown more than one generation of talented artists. Their game and return attracts spectators from all over the country. Theatre performances have always been innovation and boldness. Many things were done for the first time it is at this stage. Here you can see productions of classical works, such as "Chasing Two Hares" or "Lolita." Not far behind the theater and from the modern trends. Recently, the premiere of "Wozzeck".

Before the Youth Theatre can be reached by shuttle bus number 1, 11, 15 and 16. Also in that direction go trolley number 1 and 5.

What is the best accessible to the Chernihiv Regional Youth Theatre from: