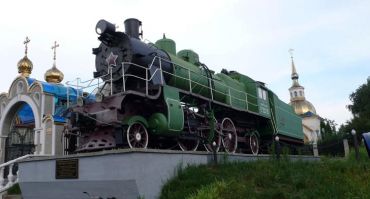 Steam locomotive Su 253-25 is located near the central square in the city railway Kovel. It stands on a pedestal near the gate of an Orthodox church, which can be seen behind the locomotive. Installed a relic of the railway in honor of the 40th anniversary of liberation from German occupation Kovel. Inauguration of an unusual monument was in 1984. Steam locomotive Su 253-25 own power driven on a concrete pedestal, remaining fixed on it for several decades.

The famous model of the SU 253-25 was developed in the mid-20th century. Her appearance on the tracks of the immense Soviet Union greatly facilitate passenger transport across the state. The fact is that since the early 1920s, the country allocated funds only for the development of models of freight locomotives. Passenger lines from this hard hit - people who want to travel by rail is growing, but the possibility of locomotives became smaller. Thus, in the 1950s we developed a versatile unit SU 253-25, which was economical for the consumer, but is powerful enough to transport large convoys of passenger cars.

What to see near the locomotive in Kovel

The cozy town full of interesting sights of different times. The largest of them - it`s monuments and memorials dedicated years of occupation of World War II, as well as the heroic liberation of the city. There is a memorial to "Mass grave of soldiers", which buried hundreds of executed soldiers. In addition, it is necessary to look at the monument "Cannon", dedicated to the soldiers-liberators occupied Kovel.

The monument is easy to find, walking through the area near the railway station of the city, he turned to face the front of the building. You can also get to it from the adjacent bus station, or walk on the streets Tymoshenko, which crosses all the main areas of Kovel.

What is the best accessible to the Steam locomotive Su 253-25 from: