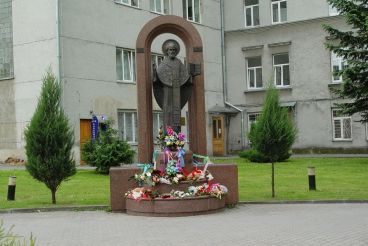 Monument St. Nicholas in Lutsk - a symbolic sculpture, installed in honor of the chief patron of the ancient city. The image with the face of St. Nicholas can be found on the coat of arms of the city, known since the Middle Ages.

During the 20th century, all of the official emblems of Lutsk were equipped with the image of the saint with various additions. In 2007 it was approved another version of the coat of arms and with Nicholas Priory.

The history of the monument to Saint Nicholas

To erect a monument in April 2000. Metal sculpture of St. Nicholas full height crowned with stone trim is red. Author Jaroslav Racehorse semicircular stage used as the pedestal on which local residents lay flowers to the City Day.

The place for the monument was chosen patron of Lutsk difficult. This is a historic district, where merchants of old gathered for bargains. Commercial building on the site where a monument has been well known among international traders, it signed hundreds of contracts and companies. In 1920 there was a Polish room is popular with the soldiers of the First World War. Historic structure was demolished in the 1980s.

What to see near the monument to St. Nicholas

Nearby is another great attraction of Lutsk - Monument shot prisoners. It is a memorial was opened in honor of people, brutally murdered during the German occupation. In the city you can find dozens of sites dedicated to the events of World War II.

How to find a monument to St. Nicholas

To find it, you need to get to the crossroads and Khmelnitsky Krivoy Val. it   the central part of the town near the city park, from which the monument can be reached in 15 minutes.

What is the best accessible to the Monument St. Nicholas from: