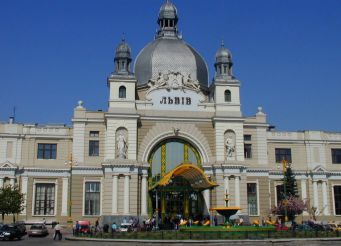 Lviv is famous for its history. Every building, street of the city breathes legends. And Lviv Train Station is no exception. This is not just an administrative building. This is one of the masterpieces of architecture.

The history of Lviv railway station

The uniqueness of this station is that it is the first railway station in Ukraine. Its opening was held in 1861 with the filing of the government of the Austrian Empire. But the building, which is now seen all the guests of Lviv, was built in 1904 on the site of the old station. The project made by eminent engineers and sculptors. The station building was the incarnation of all the best in the European architecture. Rounded and smooth forms harmoniously flows into the clean lines. Under the roof of the station were several lounges and a restaurant. At that time it was the most modern railway station in Europe.

During the turbulent years of Ukrainian history of the station building it is exposed to various destruction and damage. And only in 2003 it completely restored.

Description of the Lviv station

And now he has not lost its European charm. Inside there are six lounges of different comfort. Also at the station, you can take advantage of a variety of related services. For example, a barber shop. The walls are decorated with exquisite stucco station and stained glass windows. And getting to the platform, you feel somewhere in a small town in Europe. Forged benches and arched canopies create an atmosphere of romance. This place station saw more tears and kisses than any other area of ​​the city.

If you come to the city by train, you just get out of the car and plunge into the magic and bustle of the station. The rest of the guests of the city can reach here by tram number 1 or number 10 minibuses, 29, 35.

What is the best accessible to the Lviv Train Station from: