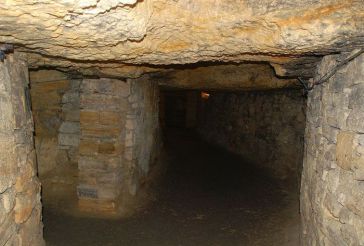 In a suburb of Odessa located vintage underground workings of the late 19th - early 20th centuries. This unique system of quarries called Catacombs and is a grand and amazing maze.

The length of the catacombs reaches three thousand kilometers, but even rough topography Odessa dungeon is still not known. Catacombs year round to maintain the same temperature, equal to fourteen degrees of heat, their depth in some places reaches one hundred meters.

The true story of this mysterious place is not known so far. Proved   only that the Odessa catacombs are the most complicated in the world due to the intricacies of the set moves.

Dropping into the catacombs, you can see the mysterious world of underground crossings powerful landslides and flooded galleries. Here before you appear unique scenery that can not be seen anywhere else in the world. Many tourists, researchers, adventurers and attracts creative people unknown Odessa dungeon.

During the tour you will get acquainted with the history of guerrilla groups, who were hiding in the cave during the Great Patriotic War. It is the heroic struggle of the Odessa underground with the Nazi occupiers inspired the famous writer to create Valentine Kataeva tetralogy "Waves of the Black Sea", which tells of the exploits of Soviet partisans. Certainly know that in peacetime in the catacombs in the labyrinth isolated from the main galleries arranged warehouses for aging cognac, as well as command and control and communications provided for emergencies.

Include in your walk along the tourist route Catacombs, and you can feel the rush of adrenaline and excitement. It is a quiet place that is filled with secrets. Catacombs are open to visitors. To do this, in the village Nerubayske located twenty kilometers from Odessa, organized a special underground museum. You can reach the place by bus number 84, 90 and 505 extending from the bus station "Supply". Although the museum is different from real wild catacombs, but he fully conveys an idea of the underworld. For the more adventurous traveler organized extreme excursions, take a few hours to several days, including an overnight stay underground.

What is the best accessible to the Catacombs from: