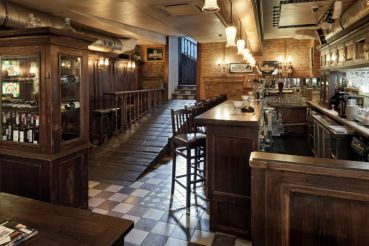 The combination of bar and restaurant - an interesting idea as to the concept of urban recreation. Irish Pub & Restaurant "Bank" in Dnepropetrovsk is called fan-bar, after which the bar and beer there and the fans. A table for the evening here is to reserve in advance, because there are not enough seats at the bar. "Bank" love, so there are many visitors.

Legend and the concept

As a joke owners that banks are different. In some hidden money in other - cucumbers. And in the Irish pub "Bank" is always fun and noisy. This is the best Irish pub in the city - at least, the injustice of such masters thesis still has not been proved. The name "Bank", on the one hand, the hints for beer, on the other - small in size. Basically, there are indeed many people, like cucumbers in a jar.

This pub is not much he loved guest - wine, tea, whiskey, beer ... meat or vegetables. The most important thing that he loved Ireland as its owners like to "Banks". And he felt even a little Irish :) That is, someone kind, sincere and strong spirit.

"Its` a dish among copyright and European dishes will both carnivore and vegetarian. First choose a duck "Cherry were" tender beef shin, "Chili con carne" steak veal fillet, goat at home cheese sauce with corn polenta and so on. D. Cottage cheese, fish and seafood, as well as the original supply of vegetables -gril will satisfy those who refused from the meat. Desserts of their own ideas in the "Bank" is also missing. Own thing - the city`s first menu "Slow Food" (as opposed to "fast food"). This is a healthy food, which is prepared slowly, according to the rules. Slow lunches - for those who do not like to rush.

There is a huge range of branded alcohol and beer (Ukrainian) for all tastes. "New Castle Brown El", "crafting Abbey El" whiskey "Kafu Arran Sauternes finish" - the pride of the pub. Tasty beer is everywhere (German, American, and so on. E., Not only from Ireland), wine list and cocktails are also pleased with the variety.

The interior of "Banks" in the best traditions of Irish pubs. Fine wooden tables, green and brown color palette around the well selected music - Visitors say that everything that should belong to this pub. Its atmosphere may resemble the old Ireland, further highlight some bright decorations.

Externally the restaurant looks like an English phone booth. This happens because of the bright red doors places. On the street you can hear Irish music, which prepares the visitor to the most important - to visit a small corner of Ireland in the heart of Dnipropetrovsk.

What is the best accessible to the Irish pub Bank from: