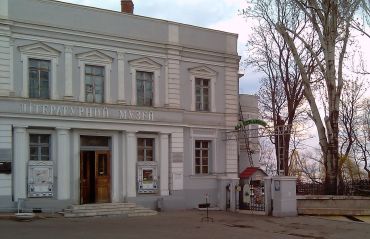 Odessa literary museum - is more than biographical information about the writers involved in this city. This is a whole artistic image, which has managed to enrich the whole world culture. Since its foundation Odessa was inextricably linked with the mastery of the pen, and this feature was reflected in the Literary Museum.

The building, which has been chosen to host one of the largest museums in the world of literature, became a palace that belonged to the representative of the highest circles of the aristocracy. This is a 2-storey building accommodates a 20 rooms, which are located exposure in chronological order. They tell about a certain period of time in the life of a literary Odessa.

OLM concept combines the museum of the history books, memorial museum, where you can gaze touch personal belongings of famous writers, and at the same time - a museum of the history of literature and culture of the city. There are more than 300 writers` names (from Pushkin to Zhvanetskogo), whose work has played a significant role in the development of local culture and not only.

Today Odessa Literary Museum is the hallmark of the city. In addition to the permanent exhibition, there are regularly held literary and art exhibitions, concerts of classical music and a variety of cultural events. Continuing a long tradition of Odessa yards to the building of the museum adjoins a cozy courtyard in the Italian style. It houses a unique cultural entity called the Sculpture Garden , which has no analogues in the world.

What is the best accessible to the The Odesa Literature Museum from: