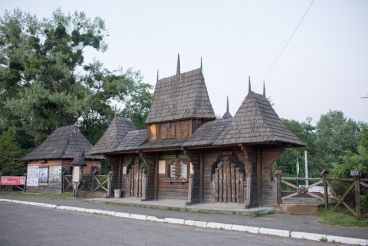 Museum of Folk Architecture and Life in Chernivtsi - is architectural and landscape complex, the territory of which are monuments of folk architecture and way of life the mid-19th and early 20th centuries. The museum consists of two ethnographic areas is "Khotinshchina" and "Western Dniester." Among the picturesque nature with a diverse landscape recreated the evolution of housing and living conditions of the peoples who inhabited the Bukovina. Today it is represented by 35 public and farm buildings, a church bell tower, forge, inn, mills, windmills and houses. The interior of the buildings has retained its original form, is presented everyday objects villagers, traditional clothes and jewelry, embroidery, carpets and much more.

Is especially proud of the museum windmills early 20th century, which are specific to Bukovina. They bunk, the second floor is extended, the mill housing with wings revolved around a massive oak pillars, deeply buried in the ground. These structures are evidence of outstanding ability craftsmen.

The museum is always happy to greet visitors who want to get acquainted with the traditional architecture and way of life of the peoples of the Bukovina region.

Ethno-museums located in the eastern part of Chernivtsi on the street Svitlovodsk. Next - the final stop of trolley №4. The museum can be visited from 10:00 to 17:00, except Mondays.

What is the best accessible to the The Chernivtsi Regional State Museum of Folk Architecture and Way of Life from: