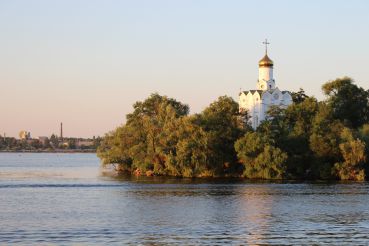 In Dnipropetrovsk on Monastyrskyi Island, known as Komsomolskyi Island, in 1999 an Orthodox Church of Moscow Patriarchate in honour of St Nicholas was built. St Nicholas Church was the winner of "The symbol of the Dnipro-2010" competition, which aimed to define an architectural symbol of the city. The fact the Orthodox Church gained this victory was a surprise to nobody, because the white church with golden dome has always attracted attention of every passerby and it is well viewed from different parts of Dnipropetrovsk.

According to legend, a monastery, built by Byzantine monks in 870, used to be on the place of St Nicholas Church. That’s why the island was named “Monastyrskyi”. People say, in 957 the Princess Olga waited in this monastery till the storm was over. However, none of these facts is actually confirmed documentary: archaeologists still didn’t prove the monastery or church existed on these territories.

There was a monastery on the island or not is a matter of history, but the existence of the snow-white church today is the merit of the Orthodox community and its prior Archpriest Igor Sobko. Dating back to the year of 1996 it was decided to build an Orthodox church, and he led its construction. Igor Saenko, an architect from Dnipropetrovs’k, was an author of this project. A year after the building was started, an icon of St Nicholas, written in Italian city Bari, was brought to the temple.

The first Divine Liturgy in St Nicholas Church was celebrated in May 22, 1999, and in October there was a grand opening of the temple. Today St Nicholas Church surprises visitors with its great combination of simplicity and charm. After this temple was built, the architect pointed out, the church had its prototype – the temple of the Holy Spirit in the Trinity-Sergiy Monastery. "The Church is designed in an Old Russian tradition and emphasises the spirituality inherent in Orthodox architecture", – said Igor Saenko.

Those who profess Orthodox religion come to this sacred place from everywhere. You can pray to St Nicholas, icon of which is located in the temple. You will hear beautiful sounds of seven bells placed in the bell tower in 2001. Finally, here you can stay alone with yourself and find real peace.

What is the best accessible to the St Nicholas Church from: