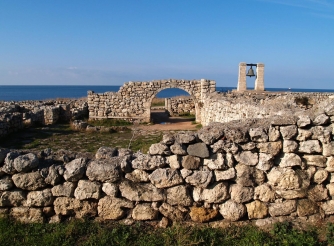 The city Chersonesus Taurica was founded more than two and a half thousand years ago in the southwest of the Crimea Peninsula. This ancient city-state was founded by Greek colonists. The name of the city wasn’t a random choice. "Chersonesus" means peninsula in Greek, as the city was situated on the peninsula, and the name "Taurica" was given due to the fact the city was inhabited by the Tauri tribes.

The history of the city-state is quite intertwined with the history of Ancient Greece, Ancient Rome and Byzantium. They used to be the main trading partners of Chersonesus Taurica, where viticulture, wine making and fishing were the backbone of the economy. We can say, the city-state was independent as it minted its own coins.

A theatre and temples in honour of various gods used to be on the territory of this ancient city. With the spread of Christianity new chapels and Christian churches were built. Now the ancient Volodymyr Cathedral can be noted by you on the territory of Chersonesus. According to legend it was built exactly on the place where Kyivan Prince Volodymyr was baptized in 988.

Today Chersonesus Taurica is a national reserve located on the territory of the city Sevastopol. The reserve is considered to be a unique historical and archaeological site of South Ukraine, which is also well known in other countries. It may take more than a day to learn this national park, so you could enjoy the spirit of antique and ancient atmosphere. The main street of Chersonesus opens you the world of ancient times.

The ruins of the only one ancient amphitheatre in Ukraine are situated in this picturesque place. Zenon Tower that once guarded the city gates can be noted by you here too. Do not miss the ruins of the "basilica of 1935", "Uvarivs’ka basilica". You will also see the "Basilica in Basilica”, which is unique due to the fact, that it was built on the place of an old basilica and its fragments. The ruins of the Mint, where coins were minted in the ancient times, are interesting as well.

An underground temple-mausoleum was discovered while excavations. You can visit exhibitions in the museum, where archaeological findings are presented.

To get to the national reserve, you should go to the city of Sevastopol and take a bus from its railway station. These are buses # 107, 109, 110, 112. Get out at the bus stop "Dmytriy Ulianov Street". In 15-20 minutes walking you’ll notice the ruins of the ancient city.

What is the best accessible to the National Preserve of Tauric Chersonesos from: