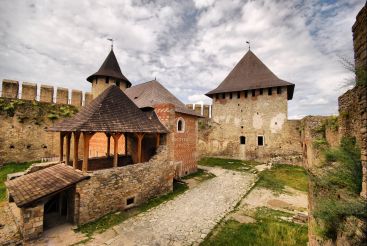 Fierce wars, great uprisings, glorious victories and terrible defeats have left marked impressions in the history of an ancient town Khotyn, which was engaged in violent battles for possession of a powerful fortress. To get to know the history of ancient times, to see places where fierce battles used to be, you are well advised to visit famous Khotyn Fortress. There is an interesting theory concerning the name of the city. They say it was formed from the word "khotity", meaning “want”. Indeed, Khotyn had an advantageous location - at the crossroads of important trade routes and has always been a cherry on the pie for conquerors. Polish kings, Moldovan rulers, Turkish sultans aimed to occupy Khotyn lands. By the order of King Danylo Galician, the stone fortress was built on the place where a wooden one used to be, and it became one of the most powerful fortifications in Eastern Europe.

A drawbridge used to be an entrance to the inner castle and played an important defensive role, since it could deter an invasion of enemies. If they busted into Nadbramna Tower, arrows and spears flew into them, including red-hot pitch and stones killing them. The attackers tried to escape and in a blue funk run to another bridge, getting trapped there. The bridge was spread with fat and the enemies, affected by mechanical device, flew down in a ditch with metal spears sticking out.

An old draw well of 62 meters deep can be seeing in the castle courtyard. Even today you can draw water from this well. The water is amazingly tasty!

Khotyn Fortress is also famous due to the fact, an important battle between the Turks and the Ukrainian-Polish army was here in 1621. That is how Ottoman expansion was stopped and Europe was saved from Turkish domination. The battle led by great Ukrainian Hetman Petro Sahaidachnyi was won! The Turks used elephants to attack a Polish camp. Unable to withstand the pressure, the Poles began to flee. But Cossacks were skilful, they let the elephants to come to their camp as closer as possible keeping silence and suddenly created a great noise, which scared the elephants and they went back. Afterwards the Cossacks attacked a Turkish camp. This is how the Ukrainians and Poles defeated the 250 thousandth army of Sultan Osman II, who at that time controlled many European countries.

Thanks to one of the most famous legends concerning a large wet spot on the west side of the fortress, Khotyn Fortress is considered a romantic and even mystical place. It is believed that this spot was formed from the tears of rebels who did not want to obey the Turks and therefore were executed in the castle. According to other version, they were tears of a beautiful girl Oksana, who was buried alive in the walls of the fortress by Turkish invaders.

The castle is popular with filmmakers. Many famous movies were filmed in this fortress: "D'Artagnan and Three Musketeers", "Zahar Berkut", "Arrows of Robin Hood," "Viper," "An Old Fortress" and others.

An international medieval festival "Battle of Nations” is annually held in Khotyn Fortress. The most experienced soldiers from different countries come to compete with each other. Everyone can come and see this colourful show. In addition you can visit and take part in organized workshops, funny fairs, concerts, and interesting contests. You’ll have opportunity to buy authentic jewellery, handmade weapons, medieval clothing and armour, or sample food and drinks prepared according to old recipes.

What is the best accessible to the Khotyn Fortress from: