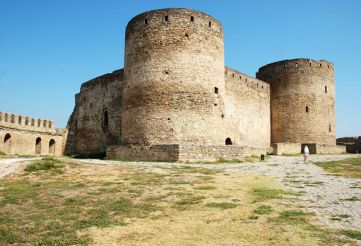 On the rocky cape in the city of Bilgorod-Dnistrovs'kyi a medieval fortress is located. Its high walls look majestic next to the Dniester Estuary. It is the Akkerman Fortress, which will certainly impress you with its size! Powerful defensive walls and towers that have been preserved in its original form till present days show us how important and impregnable this construction was.

The fortress is partly located on the territory where an ancient Greek city Tyras prospered. It was founded in the 6th century BC. Numerous streets and buildings, fortifications and towers were excavated by archeologists. This allows us asserting that Tyras was an important trade center of the North-West of the Black Sea region. To the right side of the main entrance to the fortress you might see this ancient city being under excavations. At the times of Kyivan Rus’ the Slavs called this city as Bilgorod. In the 14th century it became a part of Principality of Moldavia. It took twenty years to build a defensive fortress on its territory.

In the 15th century the Turks captured this fortress and named it Akkerman. That means “white stone” due to the fact the fortress was built of chalk-stone. The fortress is known as Akkerman till present days.

Defensive walls of Akkerman have the form of an irregular polygon 2,5 km of perimeter, 5-15 meters high and 1-1,5 meters thick. Walking on the site of defensive walls you might feel all the scale of this construction. There 34 towers were built, each of them had its own purpose, as well as for living or food keeping. In order to maximize efficiency of defence, walls and towers were equipped with battlements and embrasures. Some of towers have their own names according to the associated legends. These are Ovidius Tower, Pushkin Tower, Dungeon, Treasure House and others. They were built the way they could be used for defence. Thereby a few centuries ago this defensive construction was used for its main purpose – protection, because for that time Bilgorod was the cherry on the cake for many conquerors.

Once you have visited the fortress, you’ll see how people lived in the Middle Age. The fortress is of two defensive levels. Inner defensive walls divide it into four courts. This construction was perfectly planned for the most effective defence. Civil court was intended for protection of civilian population. The highest tower Vartova is located there. We must point every generation has brought something new. As an example you can see a mosque built by the Turks on the ruins of orthodox church. Stables, barracks and arsenal were located in Garrison court. Port court has been badly preserved, it was used for trade.

The most interesting place for visitors is Citadel, four corners of which are pointed with the most powerful towers. There was a commandant court, exchequer and powder magazine. The fortress is rounded with a moat of 20 meters deep, which was filled with water. The main gates were equipped with a pendant bridge and a gabled roof. You’ll see special holes for boiling water and pitch. It is not surprising that many directors choose this place for their filming.

While visiting the fortress you would imagine yourself in those former times. These powerful walls can tell you their heroic past so you might feel yourself as a little part of a great state. Also different festivals, knightly tournaments and colourful theatrical performances take place in the Akkerman Fortress. That creates an inimitable atmosphere of the Middle Age.

What is the best accessible to the Akkerman Fortress from: