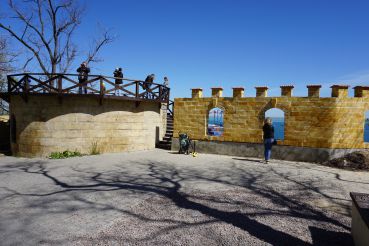 Hard to believe, but in place of the current stadium "Chernomorets", located in the park to them. Shevchenko, two centuries ago stood the severe walls. Odessa fortress - powerful fortification was built on the orders of the famous Alexander Suvorov, appeared in 1795.

It was erected on the site of an ancient stone castle Hadzhibey, mention of which there are more in the 14th century. Masters of the ancient fortress were Turks. However, during the Russian-Turkish war Hadzhibey became the spoils of war: it was dismantled stone by stone literally. At the site of the ruins of the Russian decided to erect fortifications. But after 20 years novovozvedennuyu Odessa fortress deemed unsuitable for defense and reorganized the quarantine. It was established at the Odessa port for security reasons - here submit suspicious goods and passengers arriving from countries with unfavorable epidemiological situation.

Unfortunately, the only preserved remains of a protective bulwark: St. Andrew`s Bastion, where in 1891 established the Alexander Column, part arcade Quarantine walls , the Powder Tower and the dead. For a full reconstruction of the monument of architecture means no: power limited to maintaining appearance.

About the amazing history of these places that were once part of the Ottoman and Russian empires, can be found at the Museum "anniversaries in the history of the city", which you can easily find in the Powder Tower. You will be told many legends that shrouded the walls. Maybe even be able to meet a cast known adventuress, Sonka the Golden Pen, the spirit of which has been met here impressionable ladies Odessa ...

A spectacular scenery lovers can enjoy plenty of beauties Seaport, opening from the Quarantine arcade.

What is the best accessible to the Odessa fortress from: