The Odesa National Academic Theater of Opera and Ballet 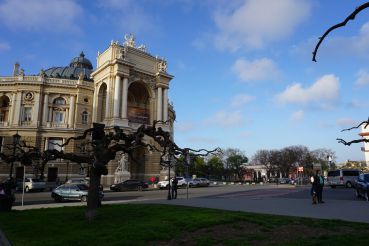 The famous Odesa National Academic Theatre of Opera and Ballet is located in the charming, picturesque city of Odesa. Today the citizens of Odesa humorously compare it with the "Viennese cake", and theatre-goers from all over the world consider it "the best creation of Austrian architects" and "pearl of European Baroque". Therefore you shouldn’t be surprised that the Odesa Opera Theatre, which is already 125 years old, is one of the most remarkable places in the list of the most beautiful buildings in Ukraine.

The first opera theatre in Odesa was built in 1809. And next year the first performance was played on its stage – one-act opera of Freylih "New Family" and vaudeville "Consoled Widow" performed by Russian troupe of Porphyry Fortunatov. People say, even at that time this stage was a kind of talent test for actors. If the play in the Odesa Opera Theatre had a success among its viewers, this troupe went to the capital of the Russian Empire. But in 1873 the theatre building burned to ashes. They say the fire was caused by gas jets, which at that time were used for the building illuminations.

Ten years passed and the Odesa citizens decided to build a new art and architecture masterpiece. Viennese architects Ferdinand Felner and Hermann Helmer were invited to make a project of a new building. The Chief Architect of Odesa Alexander Bernardazzi and architects Yuriy Dmytrenko and Felix Honsiorovskyi helped them in the construction. The new Odesa Opera and Ballet Theatre was opened in Odesa in 1887. The famous writer James Aldridge said: "Great theatre, I’ve never seen anyone like this in any country of the world".

The modern building of the Odesa Opera Theatre is decorated in the style of Vienna Baroque. You’ll be impressed with its interior elements in the French Rococo. The hall seats 1600 spectators and is considered to be the most beautiful part of the whole architectural masterpiece. It is decorated with mouldings and gildings. Your attention will be attracted with extremely beautiful chandelier of 2 tons weight, and originally painted ceiling, where scenes from the works of William Shakespeare "Hamlet", "A Midsummer Night's Dream", "The Winter's Tale" and "As You Like It" are depicted. Superior acoustics of the theatre hall allows spectators to hear even a whisper in the inmost corners of the theatre. Finally, in any other theatre you will not see the drop-curtain, which was designed by the greatest theatre artist Alexander Golovin. The facade of the theatre is worthy your attention. Above it you will see the muse of tragedy Melpomene. Below, near the main entrance, two sculptural groups can be noted by you: a fragment of the tragedy of Euripides “Hippolytus” and an episode of the comedy of Aristophanes “The Birds”. On the pediment of the building you can see busts of the founders of Russian literature and art: Alexander Pushkin, Mikhail Glinka, Alexander Griboyedov, Nikolai Gogol.

Visit the Odesa Opera Theatre, breathe in the aroma of passion behind the scenes and heed the music, which thanks to its perfect acoustic fill the whole theatre – you’ll get real pleasure and unforgettable experience!

What is the best accessible to the The Odesa National Academic Theater of Opera and Ballet from: