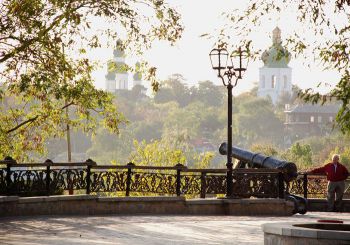 Chernihiv is one of the oldest cities in Ukraine. At the times of Kyivan Rus’ it was the centre of Chernihiv-Sivers’k Principality. Such cities as Kyiv and Novgorod together with Chernihiv became powerful military-defence posts of an Old Russian state.

Chernihiv Rampart, one of the most visited places in the city, can tell you much about its heroic past. It is located in the central part of Chernihiv, where the river Stryzhen’ flows into the Desna. Previously, on the top of this mound of earth a defensive fortress Dytynets’ was erected, which was separated from the outer part of the city by a moat. Its territory was considered the safest for the construction of cathedrals, churches, houses of princes and lords. In the late 19th century, all defensive posts of Chernihiv Rampart have been demolished and a boulevard was built instead. Now, most architectural monuments of the city are located on the territory of Dytynets’.

Saviour Cathedral is thought to be the oldest building there. It was built in the first half of the 11th century by Prince Mstyslav. St Borys and Glib Church together with Saviour Cathedral belong to the History and Architecture Reserve "Ancient Chernihiv”. Concerts of sacred music are held there and exhibitions present their collections of Chernihiv architecture, crafts, and temple murals. In the church of St John the Evangelist, built in the early 18th century, the Directorate of Architectural Reserve "Ancient Chernihiv” can be found by you. The Museum of Ukrainian Icons is located in this building.

In 13-15 centuries the cultural development of Chernihiv was suspended because of the devastating attacks of the Mongol-Tatar hordes, and its domination in the lands of Kyivan Rus’. For a long time no one architectural monument was erected on the territory of Chernihiv Rampart.

In the late 17th century in the south-western slope of Dytynets’ a new building, known as the "House of Masepa”, was built. According to the legend, the Ukrainian Hetman Masepa concealed there Motrya Kochubey, his young beloved, who fled to him from the family home.

St Catherine Church, one of the most amazing landmarks of Chernihiv, is considered to be a masterpiece, which is a real adornment of the city entrance. It is situated on the hill and is separated from the rampart by a ravine. It was erected in 1715 in memory of Cossack General Jacov Lyzogub, who took the Turkish fortress of Azov in 1696.

Twelve cannons are exhibited along Chernihiv Rampart that reminds us about its defensive destination. People say that this gift was given to the citizens of Chernihiv for their military achievements from Tsar Peter I.

The Monuments to Ukrainian poet Taras Shevchenko and Russian poet Alexander Pushkin were erected in the park in the 20th century. According to traditions of Chernihiv Rampart, just-married couples lay flowers on this place.

Chernihiv Rampart has long become a favourite place of city visitors and residents. Walking through the alleys of the park, you can feel the spirit of ancient times. The tourists can expect wonderful views of the Boldin Mountains and ancient Russian monasteries – Elets’ Assumption Monastery and St Illia Trinity Monastery, from terraces of Chernihiv Rampart. On the boulevard you can visit various cafes and enjoy traditional Ukrainian dishes.

What is the best accessible to the Chernihiv Dytynets from: