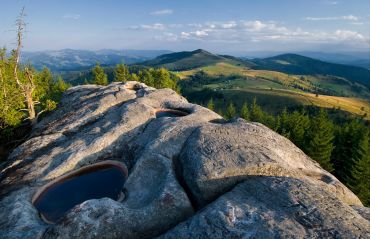 Not far from Bukovets pass in Verkhovyna district stands Painted Stone. It is formed from sandstone cliff 20 meters high. At its top is a flat area where you can admire the stunning beauty of the Carpathian Mountains.

So happened that people who have got here, leave their autographs, "painting" - hence the name of this artifact. Over the centuries there have accumulated a huge amount of inscriptions, drawings - their parts can be traced in the Hutsul national ornaments. You can also see paintings of Ivan Franko, O. Kobylyanska, Kotsyubinsky.

According to legend, in ancient times, people lived here tribes of giants, the so-called carp, which has tremendous power. They also built a huge boulders from the mountain - a monument to themselves. Another legend says, this place is an ancient pagan sanctuary, where they spent the sacred rituals, offered sacrifices to the gods, summoned spirits.

What is the best accessible to the Pysanyi Kamin from: