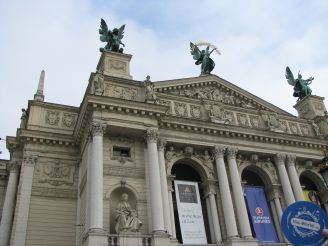 L’viv is one of the most beautiful cities in Ukraine, where you can feel European charm, harmony and beauty. It is unique due to its architectural and historical sights as well as its music and theatre art.

In the very heart of the city you can see the L’viv National Academic Opera and Ballet Theatre of Solomiya Krushelnytska. History of the L’viv Opera Theatre begins in 1897 – the time L’viv was officially known as Lemberg, and used to be the capital of the Kingdom of Galicia and Lodomeria, a large autonomous province of the Austro-Hungarian Empire. This L’viv art temple was designed by Zygmunt Gorgolewski.

The building was built where the Poltva River once flowed! The architect made a courageous decision by planning to enclose the river underground and use solid concrete blocks for its foundation. Thus, the L’viv Opera Theatre is the only theatre of the Old World that was built on the river.

The theatre was built in the style of Viennese neo-Renaissance successfully combining architectural styles of the Renaissance and Baroque. Façade forms impress with their grandeur, richness and diversity. Famous sculptors created statues of eight muses and placed them over the main cornice of the facade, above which you might notice a high relief composition "Joy and suffering of life", as well as Glory Sculpture holding a palm branch located in the centre.

You’ll be impressed with interior of the theatre as well. This is a beautiful combination of gilding, coloured marble, decorative paintings and various sculptures. Plafond "Apotheosis of Glory", sculptures of Genius and Angel, as well as ancient emblem of L’viv will be noted by you above the stage, which is beautified with a decorative curtain “Parnassus” that is usually dropped on the occasion of premieres and special events. The painting depicts allegorical figures of mythical gods.

An auditorium seats over one thousand people and its shape reminds a lyre, which consists of four tiers. The hall is decorated not only with paintings and sculptures, but also with excellent modelling. In the theatre there are three balconies and each is unique. The first balcony is remarkable due to its twelve paintings chiselled in gray marble representing mythological scenes, on the second balcony you might notice Atlantes, and the third one is decorated with female and male statues.

At the level of the first balcony there is Mirror Hall, which bears its name due to mirrors placed there oppositely, thereby visually enlarging the hall’s space. Arches divide the hall into three parts. Above the mirrors you can see pictures, where fragments of opera and drama performances are depicted. In addition your attention will be attracted by paintings reflecting all four seasons, different kinds of art and professions, which are located under the plafond. In the niche of Mirror Hall you can see busts of eminent playwrights and composers, such as Mykola Lysenko, Mikhailo Hlynka, Peter Tchaikovsky, Semen Gulak-Artemowski.

Ukrainian and foreign performances are opened on the stage of the Opera Theatre as it was many years ago. Thus the first ballet performance of the Swan Lake of Pyotr Tchaikovsky was staged here. The Vienna Ball was reopened in the L’viv Opera not long ago.

You are well advised to visit this amazing architectural monument and enjoy its performances. The Theatre is located on 28, Svobody Avenue in the centre of L’viv. You can use taxi or public transport.

What is the best accessible to the The L’viv National Academic Opera and Ballet Theatre of Solomiya Krushelnytska from: