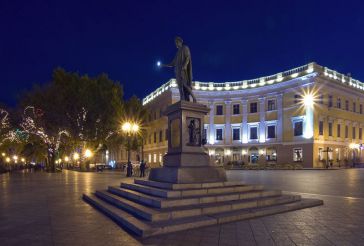 The first monument erected in Odessa - a monument to the Frenchman, Armand Emmanuel du Plessis, Duc de Richelieu. His figure of bronze, the size of which is slightly larger than life-size, stands in the heart of Odessa - the famous Promenade .

Duke emigrated to Russia after the French Revolution. He settled in the empire and became mayor of Odessa. It was called the Frenchman Emmanuel Osipovich. Thanks to him, the city became a major port. Residents to assume Richelieu founded Odessa, although it already existed before.

Later Richelieu went to France and died there in 56 years. A grateful Odessites erected a monument to him in 1828 as the person who initiated the welfare of Odessa. Sculptor I. Martos "dressed" in a Roman toga Richelieu and gave it into the hands of the scroll.

What is the best accessible to the Monument to Duke de Richelieu from: