Monument to Catherine the Great, Odesa 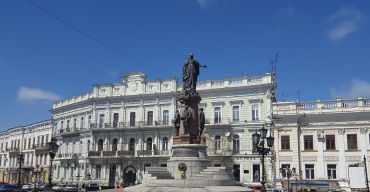 Monument to Catherine the Great and her companions opened at Catherine Square in the center of Odessa . In 1765, the port was established, and subsequently there began to develop the city. As a sign of respect and gratitude in 1900, it was decided to erect a monument to the Empress and her four favorites - de flounces, de Ribas, Zubov and Potemkin, thanks to which Odessa has found life.

After the October Revolution the monument was dismantled, and in its place opened a monument in honor of the mutineers of the battleship "Potemkin". Statue of Catherine all the time kept in the museum and almost not affected.

In 2007, the deputies of the City Council, it was decided to restore the monument. It was restored and returned to its historic place, and sailors monument was moved. Now it catches the eye of citizens in the square next to the seaport.

Catherine Square and the monument - a place without which no cost, no tour of Odessa.

What is the best accessible to the Monument to Catherine the Great from: