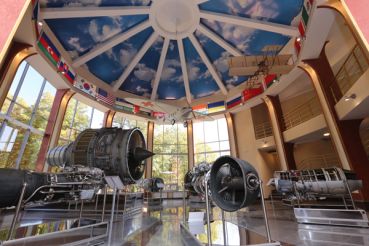 Aviation Museum and the high-tech "Motor Sich" - landmark of the city of Zaporozhye. Opening of the complex timed to two memorable dates: the 50th anniversary of the Shevchenko district in which the museum is located, and the 105th anniversary of the founding of the factory "Motor Sich". Exhibits high technology available on two floors of the museum. Here are the production of aircraft engines "Motor Sich", which is already almost a century, aircraft engines manufactured before the Second World War, the engines of modern assembly, various planes and helicopters. At the entrance to the museum installed a RC model helicopter Mi-24, which does not leave indifferent any visitor. Except aircraft exhibits can be seen, and other products, which at the time or another made on "Motor Sich". For example, chain saws, milk separators, wind power, and more. But the highlight of the museum is a collection of 25 retromototsiklov, particularly valuable model of the brand «Harley-Davidson». However, the data management of the museum collections has no plans to stay in the future there are going to extend the pavilion with open arms and a hall where products will be presented such enterprises as "Zaporizhstal" and "DSS". The museum is always happy guests and is open daily.

What is the best accessible to the "Motor Sich" Museum of Aviation and High-Tech (Boguslayev Technical Museum) from: