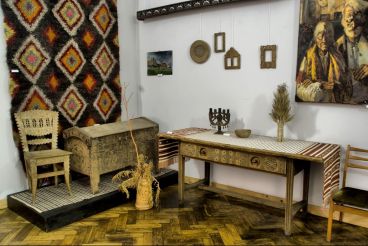 Did you know that hutsuly made ​​toys made ​​from sheep`s cheese? Look at these unique products, see what the people wore the Carpathians, they decorated their homes, can be at the National Museum of Folk Art of the Hutsul and Pokuttya whose buildings are scattered in several cities of Ivano-Frankivsk. The biggest collection is in Coloma, in the former People`s House. Kolomyysky Folk Art Museum was founded in 1926, its funds - more than 50 thousand exhibits. They are arts and crafts and the Hutsul pokutyan, since the 17th century to the present day. Distinctive embroidery, artful weaving, fine carving, forging, engraving, inlay, leather goods, hand-made ceramics - all represented in the exhibition. There are also exhibits of Tripoli culture. Part of the National Museum of Popular Arts and is the world`s only museum of Easter eggs . He, too, is in Coloma. The building is visible from afar: a 13-foot Painted egg! The museum - about 12 thousand Easter eggs. In addition, the structure of the National Museum of Folk Art of the Hutsul and Pokuttya also includes museums in the cities of Kosovo and Kalush.

What is the best accessible to the National Museum of Hutsulshchyna and Pokuttya Folk Art from: