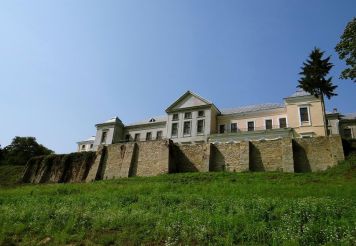 Vyshnevetsky palace has an interesting origin. He has deep aristocratic roots. Founded by one of the representatives of the famous Lithuanian-Russian family, a beautiful castle remains the most important historical monument on the territory of modern Ukrainian lands.

It is known that at the site of the present buildings for many years there was a family defensive fortress. It was built back in the 1390`s of the princes Koribut, land owners Vishnevets town. The castle served as a family estate and impregnable citadel until the end of the 15th century. After another raid Tatar troops, the building was completely destroyed. In its place was built a new stone fortress, as well as tribal dynasty tomb Vyshnevetsky - Church of the Ascension .

From this period eminent palace acquired its unique features, gradually turning into a classic manor. Over the years, there appears a large park with neat paths, built the manor house with the latest fashion. But by the beginning of the First World War almost the entire family complex destroyed. His new owner decided to restore Demidov by famous architect Gorodetsky. Thanks to his talent, the current palace acquired its well recognizable features.

Today, the palace is Vyshnevetsky on large-scale reconstruction. Dozens of experts to restore the lost luster heirlooms. Here spend numerous internal work, while guests can enjoy the amazing beauty of the preserved facade, surrounded by green lawns, an ancient park.

What is the best accessible to the Vyshnevetsky Palace from: