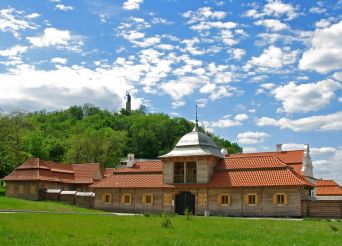 In the center of Chigirina is unusual in its importance Castle Hill. This centuries-old monument is located in a convenient place for tourists in the heart of the city, which is easily reached by car or tour bus.

Chyhyryn is the father of Ukrainian Hetman. It is here that the most crucial battle for the freedom of Bohdan Khmelnytsky Kiev land. Fortification built on Castle Hill in the 17th century, it became an impregnable fortress for enemy troops and helped to survive the locals and the Cossacks in the most difficult times. Therefore, it is often referred to as a mountain Bogdanova, in honor of the great Ukrainian hetman and commander.

To the present day castle was not preserved. However, Castle Hill is under state protection as a cultural monument and nature reserve. Throughout the year, a special duty service, tracking the order. The mountain has a view of landscaped gardens with winding paths and reflecting pool in the flowering lilies. Castle Hill is part of a larger historical and museum complex " Chyhyryn . " Pearl reserve is reconstructed bastion name Doroshenko, and a monument to Taras Shevchenko, who lived for some time in Chyhyryn, and the monument to Bogdan Khmelnitsky.

What is the best accessible to the Zamkovaya Mountain in Chyhyryn from: