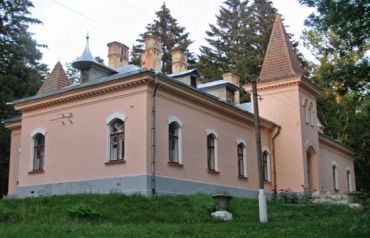 Luxury manor nestled on nearly 50 acres, ordered to build a peasant Ivan Kharitonenko, fabulously grown rich on sugar production. He wished that he created in the late 19th century manor house bore the name of one of his granddaughters and spouses.

Manor became an architectural monument. For its construction were invited eminent masters. A two-storey palace in the style of a Swiss chalet, with its balcony zoster, became the main decoration of the manor. Park, the river divided into two parts, fills the aromas of oak and pine trees, the inhabitants of the manor for small talk strolling along the avenue of chestnut ...

Alas, during the Second World War, the imperial palace was destroyed. In Soviet times, the estate was nationalized and given to the people. Until now, there are a health resort, bears the name of the nearby village - "Vladimir".

Gem that managed to survive in the difficult year, has become-dome Church of the Saviour . This shrine, built in 1913, the master conceived in the style of ancient Pskov-Novgorod architecture. It housed a magnificent collection of rare icons, which was the pride of the owner.

By the way, if you are in these parts, be sure to visit the "Singing terraces" . They laid 10 kilometers from the estate. Cold climates Slobozhanshchina not allow to grow exotic plants, but was invented by the original decision, in the form of an arc on the southern slope of the beam, completed six stone terraces. Thus, the plant could receive more solar heat. Specific form reflected in the acoustic characteristics of the terrain - the birds singing and the whisper of leaves worse from the slightest breath of wind, reproducing a single harmonious melody.

The estate is located 80 km from Kharkov. To get to her better self-transport. Can be reached by bus from Kharkov to Krasnokutsk but then have just about 3 km.

What is the best accessible to the Natalivka Estate from: