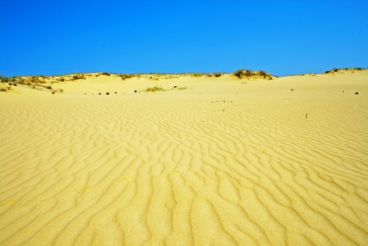 Oleshkivski sands - the largest sandy area, which only can be found on the territory of Ukraine. It has a natural origin, are formed huge mounds of sand, the greatest height is 5 meters. Formed many years ago, Oleshkivski sands to date remain pristine.

Unusual Kherson attraction occupies about 160 000 hectares. In 2010, part of the officially taken under Mr. US National Natural Park. After 1.5 years, the unusual nature reserve called "Oleshkovsky Sands" started its work.

Young natural park just a couple of years of activity had time to organize a large number of scientific papers. It hosts the study of Earth`s ecosystems, tracking processes and bio Zoosfery. Various types of animals and insects are secured by the national park, not just prolonging their lives, but also to improve its quality.

Tourist profile of the park remains one of the most important for Oleshkovskaya sands. Guests are invited to refer to unique plants, forests, sand dunes mesmerizing scale, and see firsthand the dozens of species of wild animals, birds and reptiles living in the park.

What is the best accessible to the Oleshky Sands from: