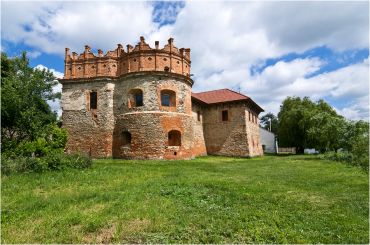 47 km from Khmelnytskyi is a city Starokostiantyniv that remarkable castle, built in the 16th century. Starokostiantyniv Castle was so strong that the Tatars could not never take it. Powerful building perfectly fulfill its defensive function. It ran through Starokostiantyniv Black way - one of the three main roads that moved Tatar horde, making predatory raids.

And the castle and the town founded by Prince Constantine Basil of Ostrog, they now named after him.

The grounds of the castle had the form of a triangle, with the two sides washed by rivers Ikopot happened, and the third borders the city. Separated the fortress from him a 200-meter deep moat. Behind him was a bastion for the shaft with the gun firing. Entrance to the castle guarded the entrance gate with a wooden drawbridge. The walls of the fortress is almost 6 meters in height, and thickness of 1.5-2 m.

Until our days "survived" two-storey palace itself-lock, part of powerful walls. Persisted storey corner tower with a basement - one out of five.

Behind the palace, along the south wall, is Trinity CER kov , which are present in the architecture of Gothic elements. Retaining only its lower tier. This action Church Kyiv Patriarchate.

What is the best accessible to the Ostrogski Castle in Starokostiantyniv from: