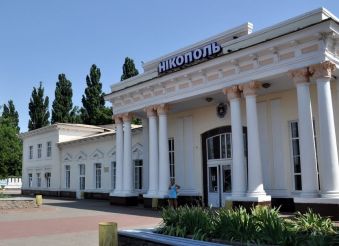 Railway station in the city of Nikopol is located almost in the center of the city. Nikopol station was opened in the 19th century. The building was reconstructed several times, but the basic idea of ​​building survives to this day.

In the station building you can get all the necessary services: comfortable waiting rooms, ticket office and long-distance commuter. Information board will inform you about the trains that will soon arrive at the station.

Station in appearance like a station, described by writers `golden age` in his novels. There can be relaxed and comfortable. But in one minute station is capable of filling the living noise of visitors and those who are just going to go on a trip.

What is the best accessible to the Nikopol Railway Station from: